Ron Mueck is a hyper-realistic artist.   He mostly uses fibreglass resin for his sculptures, so they seem life like and highly realistic, with their human features and amazing details.   He’s also previously worked in Bronze & Marble. 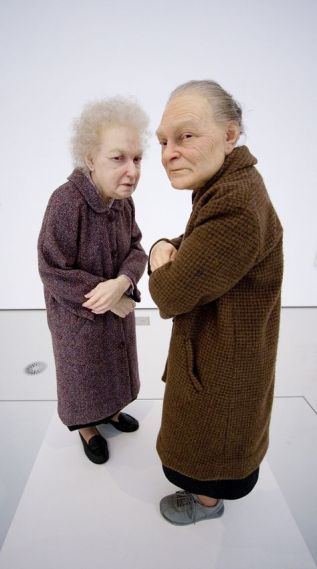 An Australian born Mueck who specialises in sculptures.   He used to be a model maker/puppeteer for television and films, for example he created Ludo the gentle giant in Labyrinth.   Making him a well sought after artist.

An artist similar is Sam Jinks, his work also being very realistic like Mueck’s.   Yet more gruesome and somehow harder to observe.

Mueck’s work inspires me yet disturbs me at the same time.   What he does is very clever, theres no doubting that.   However I do find his pieces extremely creepy.   The realistic look that I find creepy does inspire me though, it has opened my eyes to this whole new world of hyper-realism and enlightened me.

His work has previously been exhibited in galleries such as the Saatchi in London.   He exhibited 5 pieces including 6 hyper-realistic sculptures.   He uses silicone rubber and other mixed medias including polyester resin, fibreglass resin and human hair.