The media roundabout was very different.   Working with Jamie and my other collaborators to create a series of short clips to be produced into one film.   The idea of the task was to share a confession, with no rules and the potential of our own ideas to inspire us.

Given 5 minutes of thinking time to come up with a truthful confession; deep dark and secretive or light-hearted.   Whatever you wanted to share.   The only rule was to co-operate and do the task, definitely no getting away with not participating.

We were given little equipment, and little time.   Also given different roles to such as the director, presenter, camera director etc.   Knowing these skills will be beneficial for the future, incase I need to make a short film to display or go with my work, or collaborate with another student.   To keep the film clips looking and sounding professional we had to make sure we always checked the sound levels by saying a short phrase before beginning.   Also checking everyone was in frame, all being different heights in the group, the camera angle had to be checked. 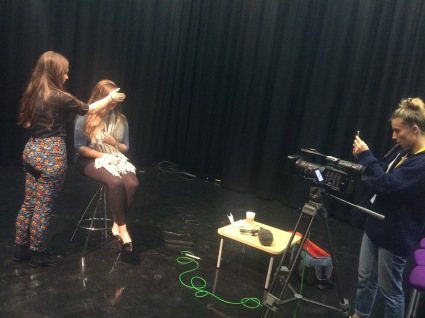 Here our group are recreating what we did when filming, including the presenter, and film maker. 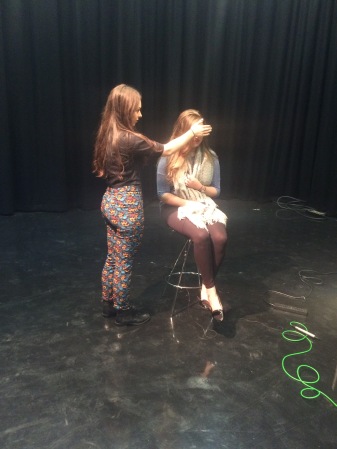 The covering of the eyes was a major part of the confessions film.   Using different hands to do this, with just their hand in shot, making sure every time that the presenters body wasn’t being seen. 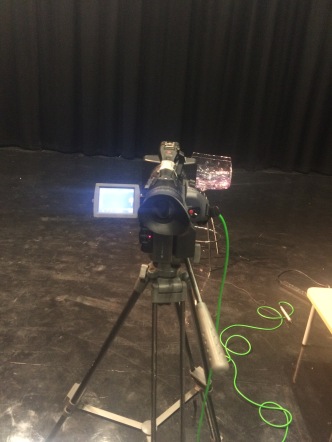 Here is the filming equipment, very useful that I will definitely use again, now I have a mild understanding of how to use it.   Maybe for filming garments I have created? 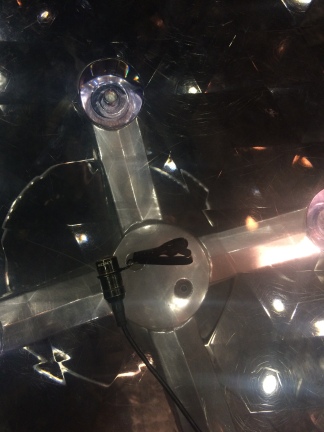 The mic, maybe the most important piece of equipment.   With everyones voice being different this makes the sound level different every time.   Therefore always having to check the sound levels was essential.

The potential of the lighting media in the studio was a big factor of the film, creating a sense of tension with only one bright studio light beaming down on the confession chair.

The hand over the eyes also created a sense of ‘disguise’ between the confession and the camera.   However with our group there was limited room for juxtaposition as most of our group contained mostly girls and only one boy, our skin tones were also very similar.

The idea of the roundabout was inspired by an artist names Gillian Wearing OBE.

The contextual artist we had been given to research as she inspired the media roundabout.   Her work was made to be shown in an art gallery not in a cinema, therefore is it still film-making? or is it art?

The work was based on her “Confess All on video, don’t worry you will be in disguise” piece.

“A short video, less than 1 hour long, featuring scenes showing a disguised person who shares a secret in an unedited monologue” – Taken from the Tate Modern website.

The only mediums she used were;  video, monitors, colour and sound.   To create a piece of art that is original and unique.

Created in 1994, when nothing else like this had ever been created.   She gave her confessionists costumes to construct disguises, then filmed their secrets. 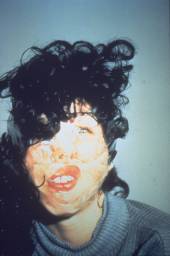